Fire is an essential tool,control of which helped to start the human race on its path to civilization. The original source of fire was probably lightning,and for generation blazes ignited in this manner remained the only source of fire.
Initially Peking Man, who lived around 500,000B.C.E., was believed to be the earliest user of fire, but evidence uncovered in Kenya in 1981, and in South Africa in 1998, suggests that the earliest controlled use of fire by hominids dates from about 1,420,000 years ago. Fires were kept alive permanently because of the difficulty of reigniting them, being allowed to burn by day and damped down at night. Flint struck against pyrites or friction methods were the most widespread methods of producing fire among primitive people.


Seek wood already touched by fire. It is not then so very hard to set alight."

The first human beings to control fire used it to keep warm, cook their food, and ward off predators.It also enabled them to survive in regions previously too cold for human habitation. They also used it in "fire drives" to force animals or enemies out of hiding .Controlled fire was important in cleaning forest for roadways, grasslands for grazing, and agricultural lands-uncontrolled,the fire destroyed the potential of the soil. Mastering fire also opened up the possibilities of smelting metals, enabling human kind to escape the limitations of the Stone Age.MF

Popular posts from this blog 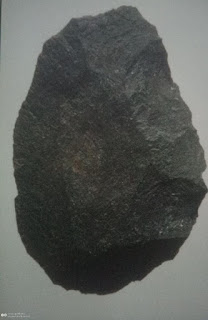 Early humankind ushers  in the age of inventions. The very first human invention consisted of sharp flints, found and used in their natural state by primitive peoples, who then went on to purposely sharpen stones. The practice reaches back to the very dawn of humankind; stone tools found in 1909 in Kenya are estimated to be 2,600,000 years old. "The best materials...include obsidian (a form of natural glass),chert,flint,and chalcedony Floyd Largent,writer The principle types of tools, which appeared in the Paleolithic period, and varied in size and appearance, are known as core, fake,and blade tools. The core tools are the largest and most primitive, and were made by working on a first-sized piece of rock or stone (core) with a similar rock (hammerstone) and knocking large flakes off one side to produce a sharp crest.This was a general-purpose implement used for hacking, pounding, or cutting. Eventually, thinner and sharper core tools were devel
Read more

March 26, 2020
Homo heidelbergensis builds the first hut. The earliest evidence for built shelter appears to have been constructed by Homo heidelbergensis, who lived in Europe between around 800,000 B.C.E. and 200,000 B.C.E. Anthropologists are uncertain whether these were ancestors of Homo sapiens (humans) or Homo neanderthalensis (Neanderthals) or both. At the French site of Terra Amata,which dates back around 400,000 years, archeologists have found what they believe to be the foundations of large oval huts. One of these shows evidence of fire in a hearth, although other archeologists postulate that natural processes could be responsible. Archeology on sites from hundreds of thousands of years ago is complicated. Claims of the discovery of built shelters in japan from more than 500,000 years ago were discredited in 2000. In fact,all evidence for humans in Japan before 35,000 years ago is currently questionable. ...next to agriculture, [shelter] is the most necessary to man. One must eat,
Read more